Nothing damages a house more than water, whether it’s a leaking roof, a slow dripping pipe, or rising damp from the subsoil.

Water is the enemy of a sound house, so number one on the list of jobs when we moved in was fixing damp problems.

In our case when we moved in there were no obvious leaks, and nothing highlighted by the survey, but in living there some sources of damp soon became obvious. 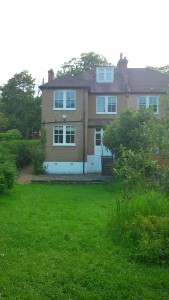 The first surprise was coming down to the lounge one day and noticing the papers I’d left sitting on the sofa were wet through.  Looking up there was a hairline crack in the ceiling and water slowly dripping through.  Straight above is a small ensuite shower room so that was the obvious culprit.

I couldn’t see any problem other than a tiny hole in the waterproof mastic on the shower room floor, but bought a tube of white silicone, removed the old silicone and did the new one.  Job done and problem fixed.

Before fixing damp problems elsewhere we bought a dehumidifier.  Getting one of these is definitely a “cheat” and is no substitute for tackling the source of the damp.  But all the same the humidifier was amazing.  I couldn’t believe how much water it captured every day.

The de-humidifier we bought was a De Longhi (see reviews on Amazon) and works really really well.  It dried out the basement in less than a week, removing 5-10 litres of water a day from the air.  Since then we’ve moved it around the house to any room that feels a bit musty or has condensation on windows.  Strongly recommended! 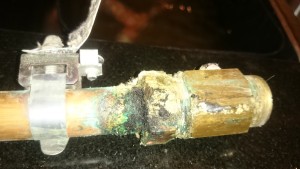 Tell tale signs of a leak

Apart from the leaks we have worked through a whole number of other sources, and each one was quickly fixed.  The only one we needed help with was the guttering, as the roof was just too high for our ladder to reach.

The results have been amazing.  All the damp problems we had are now gone, and each was such a simple fix once found.

So, so far the damp problems have been tackled by:

If you have any damp problems start with working through each possibility.  The list above is a good place to start.